skip to main | skip to sidebar

The Dao is Not Sentimental

The first part of Chapter Five of the Dao De Jing is like vinegar to many people. But I think that contains a deep truth that everyone should understand.

I thought about this after I saw yet another weepy news story about the recent bombings in Brussels. Society is flailing and the news media is sending story after story over the airwaves. But let's think about this. According to Wikipedia, there were thirty-five deaths and three hundred injuries. Lets compare that death toll to a real catastrophe, like World War II. That war lasted a little under six years (Sept 1/39 to Aug 14/45). The total deaths due to the war in that period---including soldiers killed due to battle, civilians due to war crimes, disease, and, starvation---are estimated at between 70 and 85 million. This means that at the most conservative estimate of casualty estimates, 70 million, about 32,000 people died every day during WWII. If we want to get a little closer to home, let's consider the number of people who've died in Iraq and Syria.  According to the website "Iraq Body Count", 242,000 people have died there since the American invasion. And in Syria, according to Wikipedia, 147,000 people have died in the Civil war.

Seen from this perspective, it strikes me that our society's collective reaction to a few minor terrorist attacks is wildly, crazily, insanely, over the top.

In contrast. I've been watching the way our political classes have been responding to the prospect of runaway climate change. Various celebrities and elected officials, for example, have been going on about how unfair and "over the top" it is to expect Alberta to not be allowed any way of shipping their tar sands oil to market. In contrast to the minor casualties predicted from the terrorist attacks, there are serious climate scientists who are arguing that climate change will do things like flood all the coastal cities of the world, disrupt seasonal rains in many areas, and cause the deaths of millions---if not billions---due to drought, starvation, and disease.

Look at these two YouTube videos to explain the two points of view.


It seems so crazy that so many people go berzerk about a few people losing their jobs in Alberta or a tiny number of commuters getting blown up by bombs, yet seem so totally blase about millions of people dying nasty horrible deaths due to climate change. What makes it even worse is that the majority of these other people will admit that climate change is real, they just don't want to do anything about it. The person in the second YouTube video is bang on, if you won't do anything about preventing climate change, no matter what you say, you are still a denier.

What's going on here? It seems to me that the big problem is sentimentality. By that, I mean an emotional reaction that is un-tempered  by rational thought. Take a look at the following poster that I see on the my local bus. 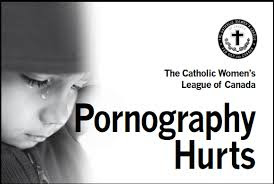 What exactly is the argument here? Did a video tape slap this crying child on the side of her head? Was she strapped to a chair and forced to watch it? Was she forced to take part in the creation of a pornographic movie? Was her mommy neglecting her because she wanted to watch or make pornography? What is it? Frankly, I don't know. I suspect people are just expected to see a crying child and come up with their own ideas. This is the problem with sentimentality, it isn't based on evidence, reason or much of anything at all. But a lot of people build their lives around it.

And the thing to remember about the anti-pornography laws is that they were used to do things like prevent birth control information. Margaret Sanger, for example, found that her pamphlets written to spread information about birth control methods were considered "pornographic" and banned under the "Comstock Laws". In addition, any attempt to portray non-"traditional" sexual orientation was also considered "pornographic", which is why the gay friendly bookstore "Little Sister's" found it's gay-friendly materials being seized at the border by Canada Customs and Revenue agents.  Since women who don't know about birth control often die due to self-induced abortions and gays of both sexes often commit suicide because they cannot find a place in society, anti-pornography laws are of life-and-death importance.

The thing to recognize about the anti-pornography poster that I put up above is that the "hurt" that it is referring to is the sense of "icky fear" that people feel when they are confronted by emotions and urges that people don't know how to understand. For a lot of people who haven't come to terms with their "animal nature", lust is something that is profoundly scary. It puts the lie to the idea that people are somehow different than all the other animals in the world.

In fact, Kurt Vonnegut Jr. wrote a short story about this issue, titled "Welcome to the Monkey House". The title refers to the discomfort that many people feel when they visit the monkey house at the zoo. It is clear to everyone---not matter how much they might deny it---that there is a profound resemblance between human beings and monkeys. (We are all primates, after all.) But monkeys have none of the inhibitions surrounding their bodies that human beings do. In
Vonnegut's story, this discomfort leads a druggist to develop a drug that inhibits human sexual desire and the government promotes it as a means of population control. But a rebel underground fights against this program and instead encourages a different type of birth control that leaves people's instincts whole. When a woman makes the transition from supporting the establishment and instead becomes a rebel (called a "nothing-head"), her first batch of birth control pills comes with the label "Welcome to the Monkey House".

In other words, going into the "Monkey House" is admitting that some aspects of being a human being---such as lust---should be admitted and accepted instead of ignored and denied. Women do want to have sex, so just preaching abstinence is not going to prevent unwanted pregnancies. (Not to mention the women in abusive relationships who have no choice in the matter.) Homosexuality is an innate condition, not a chosen lifestyle. So not allowing anyone to discuss it openly will not prevent it, but it will make it almost impossible for many young people to understand what they are going through. Wanting to keep on having good paying jobs in the oil patch is not going to change the horrendous consequences of runaway climate change. And refusing to put a few deaths from terrorist attacks in a larger context is bound to severely damage a free society.

Sentimentality is defined by Google as "excessive tenderness, sadness, or nostalgia". And the sentimental response to terrorism, job layoffs, and, pornography is dangerous. As human beings our sentiments need to be tempered by our reason and experience. If we don't, we thrash around like wounded bears, creating pain all around us.

That's why as Daoists we need to always remember to not be excessively sentimental. And this is part of the point that the famous "vinegar tasters" painting is meant to express. The rational way of looking at the world needs to temper our feelings. One of the traditional ways that Daoists used to teach this idea is through this image. A Confucian, a Buddhist and a Daoist are depicted surrounding a vat of vinegar, which all three are tasting. From the expressions on the faces of the Confucian and the Buddhist, you can see that both consider this a bad-tasting element of life that must be fought against or endured. But the Daoist smiles, because he sees it as just another part of existence and something that must be accepted on its own terms and even enjoyed if possible. Pornography doesn't really "hurt", it is just our inhibitions that cause the pain. A transition to a carbon-free economy is essential to avoiding disaster. And whether we like it or not, we are all going to die, so freaking out about a very small number of terrorist killings is not really necessary.

Posted by The Cloudwalking Owl at 10:54 AM

Become a supporter with Patreon

Digging Your Own Well: Daoism as a Practical Philosophy 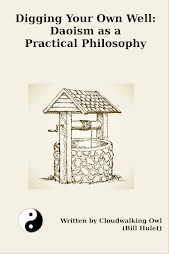 Now available as an ebook at Smashwords for $5.

Digging Your Own Well: Daoism as a Practical Philosophy

Purchase my book as a paperback now. Only $15 at Lulu!

The Cloudwalking Owl
Life is a strange journey sometimes. I was born into a small-town, farming family in Southern Ontario, in Canada. But I've always been attracted to oriental philosophy. I joined a taijiquan club when I was a young man and a strange Chinese immigrant initiated me into his Daoist lineage without my really understanding what I was getting into. That happened about thirty years ago. The man has since died and I have nothing to do with his temple. But the path he started me on has become my life as I work out what it means to be a Western Daoist in the 21st century.